Skip to content
If you are doing chest on a Monday and following up the rest of the week with a body part split, you are not training in a way that is supported by the latest science as being optimal for muscle and strength building. You’re not training optimally.

If you want more out of the time you’re investing into the gym then I would definitely read on.

Working on each muscle 2-3 times per week is far superior for GAINS than just once per week like in a typical bro-split.

Routines that allow this very easily are shown below. I recommend this way of working out to the vast majority of people I work with. 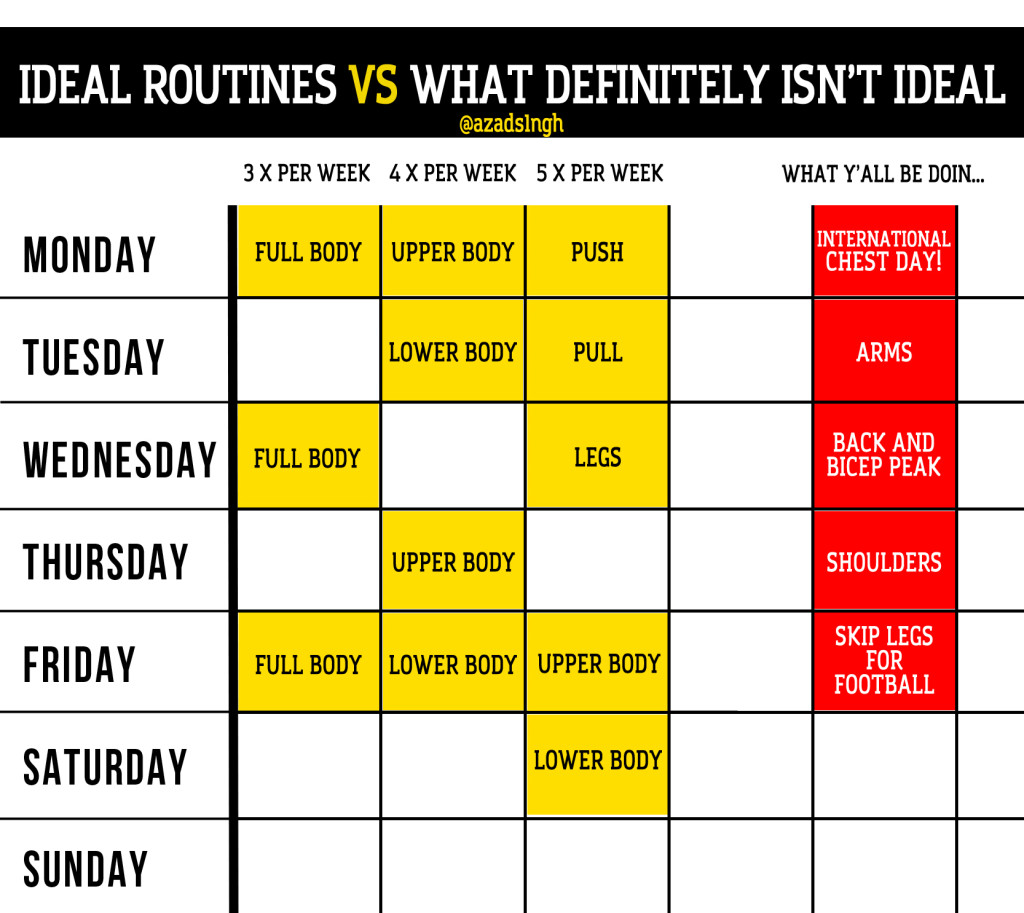 Training muscle groups twice per week has been shown in many studies to be more effective than just once per group and this idea was made solid by a review of studies done by BJ Schoenfeld et al in 2016.

The current body of evidence indicates that frequencies of training twice a week promote superior hypertrophic outcomes to once a week. It can therefore be inferred that the major muscle groups should be trained at least twice a week to maximize muscle growth.

They concluded training muscles twice per week caused superior hypertrophy. Study link – https://www.ncbi.nlm.nih.gov/pubmed/27102172 Working out with higher frequencies per week on each muscle doesn’t just mean more muscle gains but also means more time spent on certain movements. Movements like deadlifts and squats where people usually struggle. This will mean you’ll find them easier as you’re practicing them more often and therefore getting stronger on them too. Strength gains are also noted to be much higher when training muscles multiple times per week.

The main reason training this way is better is because of the increased muscle protein synthesis across the week. This is the process by which your muscles grow. MPS is what you’re trying to trigger with each workout and it only lasts for a maximum of 48 hours post workout in beginners. This number is reduced for intermediates and advanced individuals at up to 24 hours.

Let’s suppose you hit your chest on international chest day (Monday) with 4 different exercise and are extremely sore. You are doing a typical bro-split like the one highlighted above in red therefore won’t be working on the chest again until next Monday.

MPS will last a maximum of 48 hours, meaning you’ll only be growing for a maximum of 2 days. That’s 5 days of no growth if you train each muscle once per week. Do you see how being sore for longer than 2/3 days is now ineffective and actually a hindrance?

Soreness is not a sign of a good workout. Some soreness can be a sign you’ve had some new stimulus but it isn’t the case that the longer you’re sore the better you’re workout. Triggering MPS however should be your main focus.

We want to elevate MPS for as long as possible across the week whilst managing our fatigue and soreness and of course getting adequate nutrition in too, to make use of the higher protein synthesis. One of the ways you can easily do that is by splitting up your 4 exercises which were on a Monday into two 2 exercise chest sessions. Do one on Monday and one on Thursday. Despite doing the exact same amount of total weekly sets for the chest, you’ll get way better results! This is a simple change you can make, but more so just an example of how frequency and MPS works. I would suggest the routines in the above image.

The vast majority of people I’ve worked with have been in the gym following protocols within the framework highlighted above.

Change your routine as of Monday or get in touch if you need further help via email  azad@azadsinghfitness.com