Blog / Should Sikhs Be Vegan? 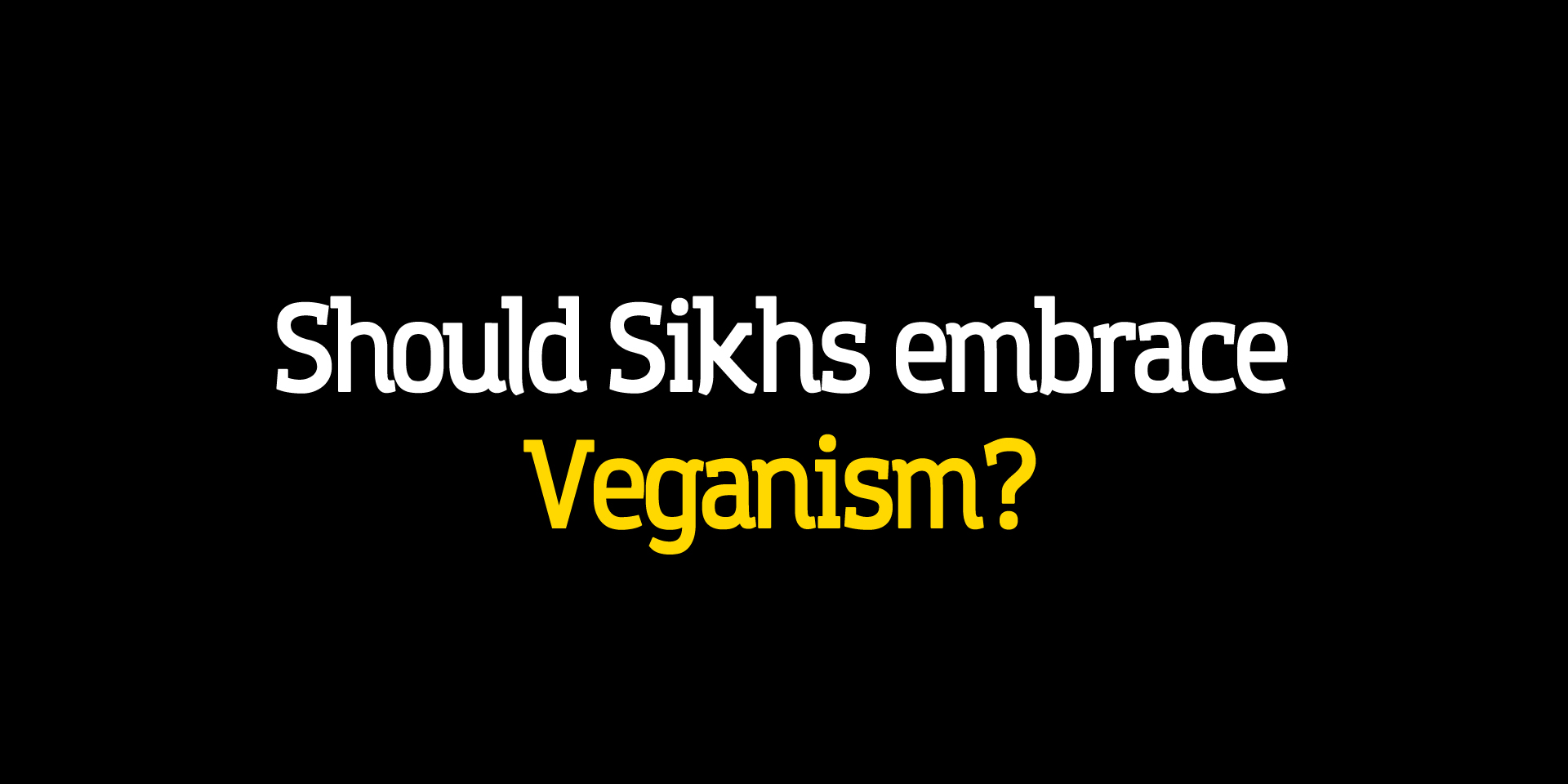 The general consensus is that practicing Sikhs shouldn’t be consuming meat, eggs or fish as it is against the Sikh code of conduct and beliefs. One of the beauties of Sikhi is the amazing concept of langar. People of all cultures, castes, faiths sit on the floor and consume a vegetarian meal as one. A true manifestation of equality.

No discrimination, no meat for the privileged – everybody shares the same adequate, death free food.

Sri Guru Granth Sahib Ji mentions numerous times about the affects of meat, alcohol and tobacco consumption on not only health but spiritual progression. Killing animals seems to be unjust, unrighteous and unneeded as per Sikh teachings.

Bhagat Kabeer also goes on to say, “the dinner of beans and rice is excellent when flavored with salt. Who would cut throats to have meat with his bread?” (Guru Granth Sahib Ji, 1374).

For the people who will bring up specific instances of history where Gurus may have killed animals or ate meat. It’s important to remember the Gurus ideas were largely that meat isn’t needed, it’s for pleasure and that it affects spirituality negatively. Situations of necessity and survival are different such as being on a battlefield where the enemies have stopped your food supplies and you need to survive for the sake of protecting human rights.

“The merit of pilgrimages to the sixty-eight holy places, and that of other virtues besides, do not equal having compassion for other living beings.” (Sri Guru Granth Sahib, pg 136)

“Do not cause pain to any creature, Go back to your Home with honour.” (Sri Guru Granth Sahib, pg 322)

“Keep your heart content and cherish compassion for all beings; this way alone can your holy vow be fulfilled” (Sri Guru Granth Sahib, pg 299)

From the concepts of langar, sewa to sharing wealth and helping the defenseless, many of Sikhi teaching are born out of compassion. Not only is this compassion for fellow human beings but all living beings. Daya (translated to compassion or mercy) should be at the forefront of a Sikhs mindset. It is a value held very high in the teachings alongside truth, contentment, love and humility. The importance of compassion is further highlighted in the Japji Sahib where it says Dharma (religion) is the son of compassion, meaning without compassion there is no religion. Wherever injustice and suffering take place, it touches most hearts, that’s our empathetic nature as humans but it is a Sikh’s duty to move forward and act.

Does this mean Sikhs should embrace veganism? Bear with me.

According to the Vegan Society (where Veganism began in 1944), Veganism is a way of living which seeks to exclude, as far as is possible and practicable, all forms of exploitation of, and cruelty to, animals for food, clothing or any other purpose. Followers of veganism are known as Vegans and they don’t eat or use any animal products (this includes consumption of meat, dairy, eggs, and use of furs, silks and leather etc.).

It was suggested early on that people ought to be vegetarians as a matter of ethics and not only health. Today we know the human body isn’t fit for meat consumption and by nature we are herbivores. The proof is in our long colons, blunt teeth, grinding chewing motion and the obvious fact that we aren’t fast like predators and certainly don’t bite into meat like actual omnivores, without cooking.

Vegans don’t consume dairy or anything from animals based on the same logic and compassion that leads vegetarians to not eat meat. It’s about the suffering of the animals. If you thought animals didn’t suffer to give you dairy or eggs you’d be wrong. Vegans avoid dairy on the premise that the production of dairy causes animals to suffer and even premature death. You see the modern world is about profit. We have taken hold of animals, against their natural habitats and exploited them for our own greed. Imagine human slavery still existed, wouldn’t we as Sikhs be vocal?

Lets look at eggs, did you know male chicks are grinded alive when born as they don’t produce eggs and therefore aren’t profitable. For you non egg eaters thinking you’re off the hook let’s look at dairy. Cows and buffalos just like women only produce milk when lactating. Because there are supermarket shelves to be kept filled, cows are often forcefully impregnated so they can produce milk and and kept into wretched cycle of  being impregnated and giving milk until they whither away and die. Just to add insult to injury their baby calves are taken away from their mothers at birth and slaughtered for meat (veal).

I don’t want to get too graphic, but the truth needs to be told. You can be pretty certain that all milk found in supermarkets which is so cheap has been a product of this factory farming system. Of course paneer, yoghurt, ghee, cheese and all the rest of it comes from the same source. If you’re interested to learn more you can watch documentaries like Cowspiracy, Earthlings, Forks Over Knives and Vegucated. I became Vegan after seeing these documentaries.

One thing is clear from these facts and the documentaries. We are wasting a HUGE deal of resources for something that isn’t needed. There are plenty of vegans out there living happy and healthy lifestyles.

Eating as a Vegan

Now there are a lot of myths to dispel, especially the one of protein. The truth is you don’t need as much protein as they fitness community will have you believe and that you can get all you need from vegan sources.

Vegans have reported increased blood flow, increased energy, better digestion and even increased recovery from workouts. It’s fair to say there are shortcomings too, things like Zinc, Vitamin B12 and Iron should be monitored carefully and in the case of Vitamin B12 and Vitamin D, supplementation is probably advised.

I have been vegetarian since 2012 and vegan since November 2015. My training has only been impacted in a positive way, I’m exploring a whole palette of foods I never even heard of and everyday I’m being asked ‘vegan, what do you eat?’

I’m now responding with ‘what we as humans should be eating’. Natural foods free of suffering and pain.

Should Gurdware be doing more?

It could be argued most of our Sikhi teaching comes from the online platform instead of Gurdware but Gurdware still have a huge role to play in our Sikhi. What type of message does it send out when Gurdware serve langar containing dairy from these terrible conditions. It could just be a case of being unaware, but unfortunately people aren’t attracted to Gurdware for the spiritual reasons so much as they are for chips and beans langar or a specific baba. There’s a lot wrong with Gurdware and the way they’re run, that should be saved for another day. When it comes to truth, spirituality and compassion one can’t help feel let down by the very places that Gurmat and the virtues should be coming to us from. With high cholesterol and high diabetes rates in the Punjabi community it definitely seems like a responsibility Sikhs in the UK and our Gurdware need to tackle head on and become aware of.

Sometimes it needs to be asked, if the Gurus were around today would they approve of factory farming? Exploiting other living beings for our own greed. One thing is clear we certainly don’t need meat and dairy. The American Dietetics Association in 2009 concluded that ‘appropriately planned… vegan diets, are healthful, nutritionally adequate, and may provide health benefits in the prevention and treatment of certain diseases.’

If you’re an Amritdhari Sikh ask yourselves a question. Why don’t you eat meat? Hopefully the answer will be more than because the rehat says so. If compassion and empathy are at the forefront of your reasoning then shouldn’t you be vegan considering all of the exploitative practices that surround vegetarian-suitable foods: eggs and dairy.