I began working out in a gym in December of 2008. I’ve tried many things, made mistakes, learnt a lot, got qualifications and even found a passion and living from the gym. Recently I’ve been reflecting on 8 years in the gym and everything I’ve experienced, hopefully you’ll pick up a thing or two.

Ever since 2008 the only break I have really taken from the gym has been a 4-5 month block during final year of university when the stress was too much for me to handle. I want to list things I picked up over the years and understand now looking back.

If you find yourself on the side of the minority in the gym, doing things that not many people are doing then you’re probably doing the right thing.

I’d say for the first 2-3 years of lifting I was simply drafting in the direction of others I saw in the gym and copying their exercises. There was no research on my part or reading done on my part to see what was the most effective muscle-building workouts. Just seeing someone doing a heavy lat pulldown was enough to get me going on the lat pulldown machine for ‘back day’.

What does the initial quote mean? Well most people in the gym aren’t doing the great exercises which have been used for decades and create top-level athletes to this day. Exercises like cleans, farmers walks, hex bar deadlifts, Turkish getups, kettlebell snatches etc. Most people are doing what they see bodybuilders do, bench presses, curls, incline presses and more curls. So when a newbie, like myself back in 2008 goes into a gym where everybody is strictly following international chest day on a Monday, what do you think the newbie works on? You guessed it.

My point: You want to be doing exercises which will apply to real life situations and help you in the real world. Picking something up off the floor and walking with it for examples – a farmers walk. Pick moves that are hard, these will get you the best benefits of strength, muscle mass and effective fat loss too. Don’t be afraid or uncomfortable because nobody else is doing these moves.

If in doubt take a look at this amazing image and see where the majority of the exercises you choose lie. Keep in mind you want to be doing as much as you can in the left hand region of the chart. 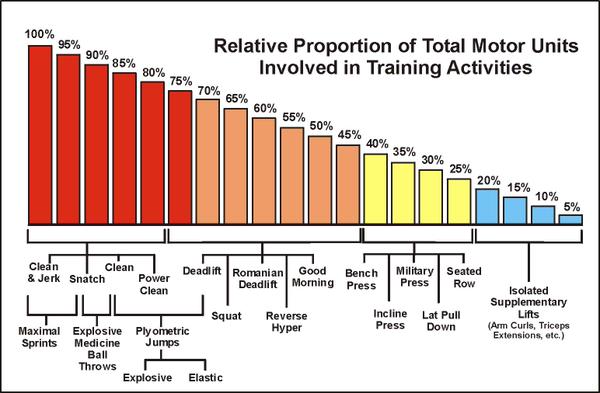 Anybody watch UFC? What happened with the Conor Mgregor and Nate Diaz first fight? Conor went all out hitting power punches and not respecting Diaz. Diaz knew he could hit with the same effort in all 5 rounds and it’s a known strategy of both him and his brother Nick. In the second round Conor was breathing heavily having thrown a lot in the first round and early of the second and Diaz capitalised. Diaz who was slower in the first round now picked up the pace and put a pace on Conor which he was unable to withstand. Diaz was consistently hitting Conor throughout the fight but eventually turned the fight around when Conor was spent.

This is the area where people who go all out fail, this is why slow and steady progress wins, this applies to the gym too. To further emphasise my point Conor had success in the rematch because he sustained his efforts a lot better, threw strikes more sparingly and didn’t make the mistake he made in the first fight of going overkill.

Over the years I’ve seen so many people go overkill in the gym.

People who aggressively go towards bulking (adding mass which is mostly fat) and then aggressively cutting (accidentally damaging hard-earned muscle tissue in the process) and wondering why they aren’t getting anywhere. Meanwhile other people, dare I say smarter people just creep up the calories to a slight surplus and make great progress in muscle mass and strength year after year without the yoyo dieting and disappointment.

The truth is that muscle-building is a painfully slow process, so slow that most gym goers will go to any extreme to speed it up. They’ll invest in the latest whey isohydrochloride 1000 which is promising quicker digestion rates than any other whey protein. They’ll invest in a new cutting edge gym routine which got so and so into fantastic shape for that new film. They’ll even invest in performance enhancing drugs. This is the truth.

But this is where I must say there are goals, which are fantastic to have and they keep you driven, but you also have life. Work towards your goals in a smart and consistent way and then leave it at that, don’t go overkill and let it consume you to where you forget to live your life.

My point: Have a goal, whether it is to get to 12% body fat or whether it is to reach a 180kg deep squat and work towards it slowly. Respect the time it takes and enjoy the process. Going overkill towards trying to do it in 12 weeks like internet fitness gurus will have you believe may leave you worse off. Also don’t buy stuff you don’t need.

The gym is an improvement centre, respect everyone in there because they’re all trying to improve. They are taking action.

You must have seen this picture… 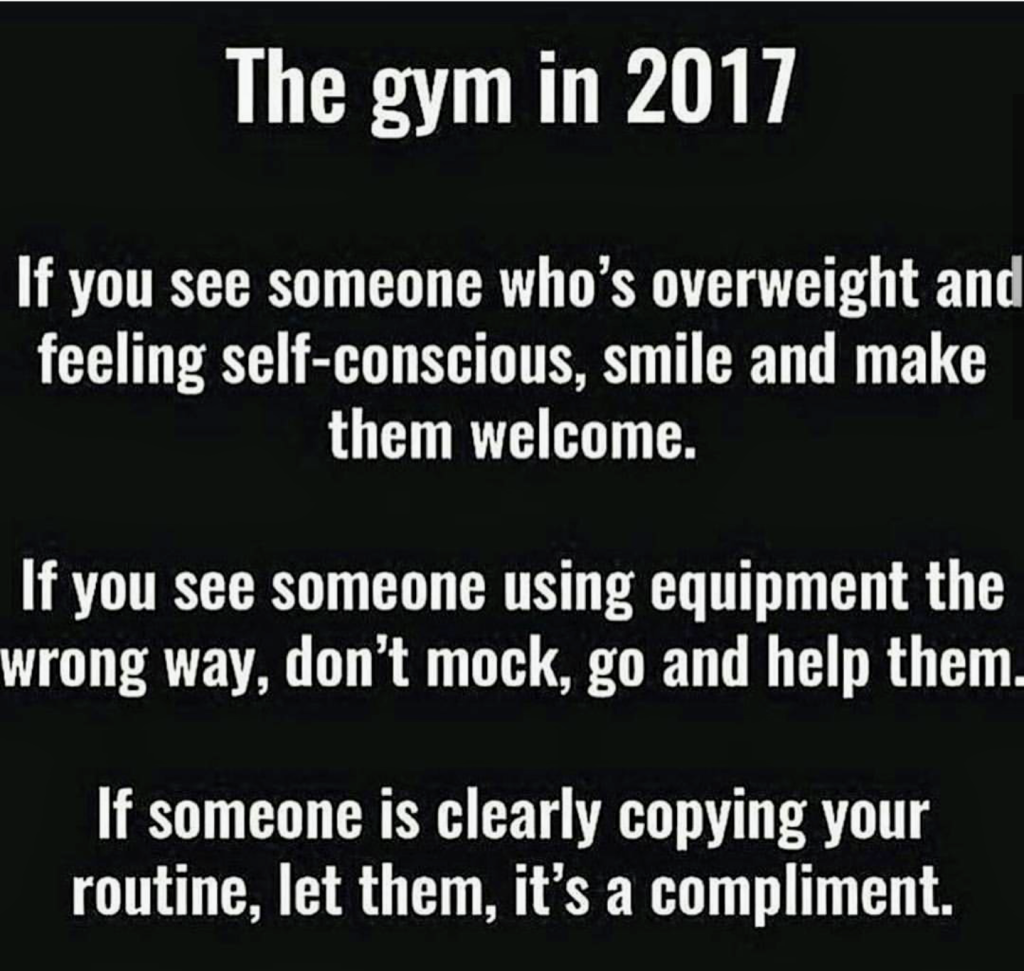 You must have also seen this… 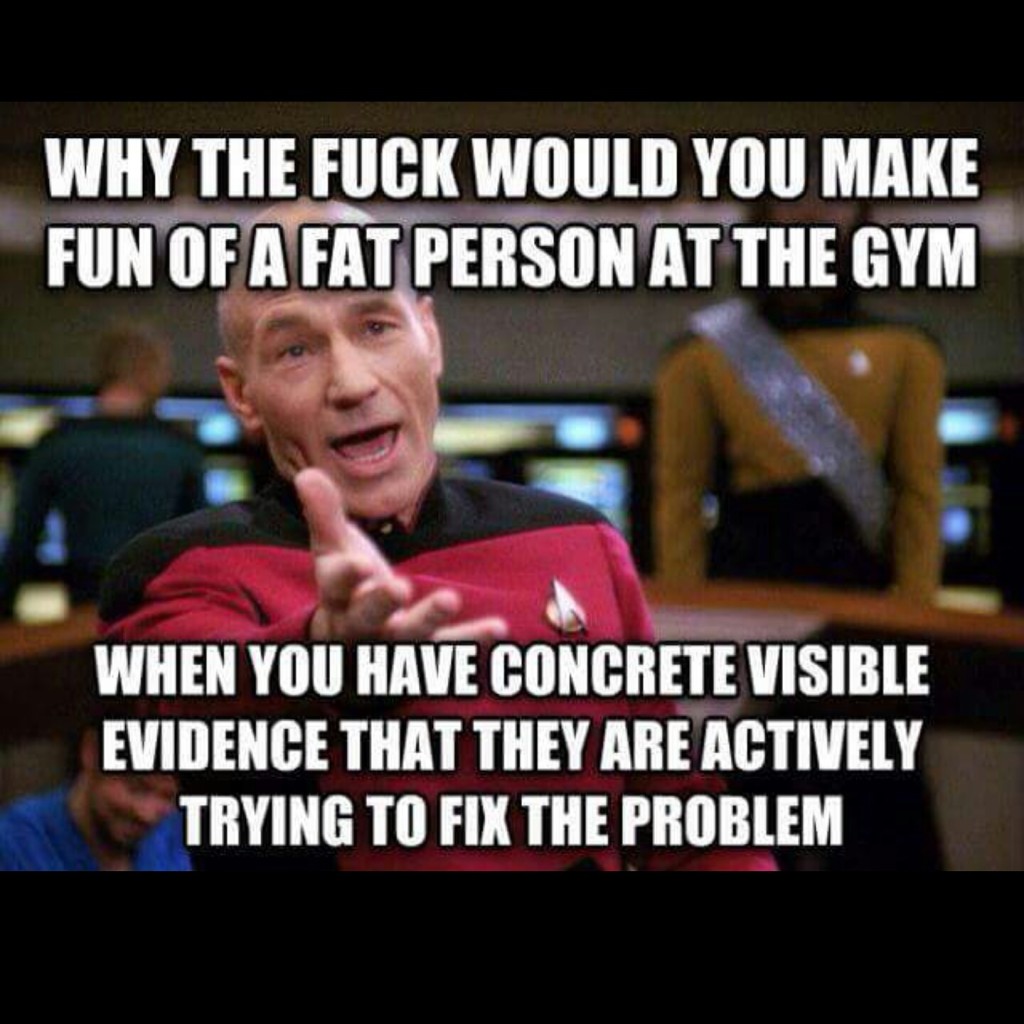 It’s not cool to make fun of people in the gym. It’s also not cool to stand around with a video camera when someone is clearly doing something wrong or dangerous. Go over and help. You may save a crazy incident or injury.

I once saw a really popular personal trainer on social media (like millions of followers popular) post a video of a ‘gym fail’. In it an Asian looking lifter was doing an exercise in the weightlifting community known as the clean high pull. Basically a deadlift into an upright row utilising total body power, it’s a really effective exercise which can translate into more power and a great snatch (one of the weightlifting moves).

That meant the guy who posted the gym fail video had no idea what the exercise was so just assumed because it wasn’t a simple known exercise that it was wrong and therefore laughable.

My Point: The gym should be a judgement free zone. Focus on your own progression. Stay safe and help and respect one another.