For those of you that don’t know I am a keen strength enthusiast. I put performance before aesthetics when it comes to gym and my training. A connoisseur of functional training if you will.

This usually comes to most people’s surprise considering my low bodyweight and scrawny frame, which of course is part of the reason I love it even more. Showing up the lightest guy is in itself a big challenge, I have more to prove.

My thinking from the beginning hasn’t really changed, I’ve always thought size doesn’t matter. I never wanted to be a guy carrying around a load of ‘junk mass’ or unwanted weight. I’m happier with 10% body fat and Abs year round. Being able to compete and play sports across the board whether basketball, tennis, strength competitions or a game of football. I was and have always been fascinated by being athletic enough to manage all at once.

Every year since 2011 there has been a local strongman competition, ‘Sandwell’s Strongest Man.’ Having entered initially to judge my strength levels amongst other bigger guys I was quite shocked to have won. Just to give you an idea of events I deadlifted 140kg for 25 repetitions and rope pulled a 1.5 ton Subaru over 25 meters in 23 seconds. I won in the last event by deadlifting 200kg @74kg. 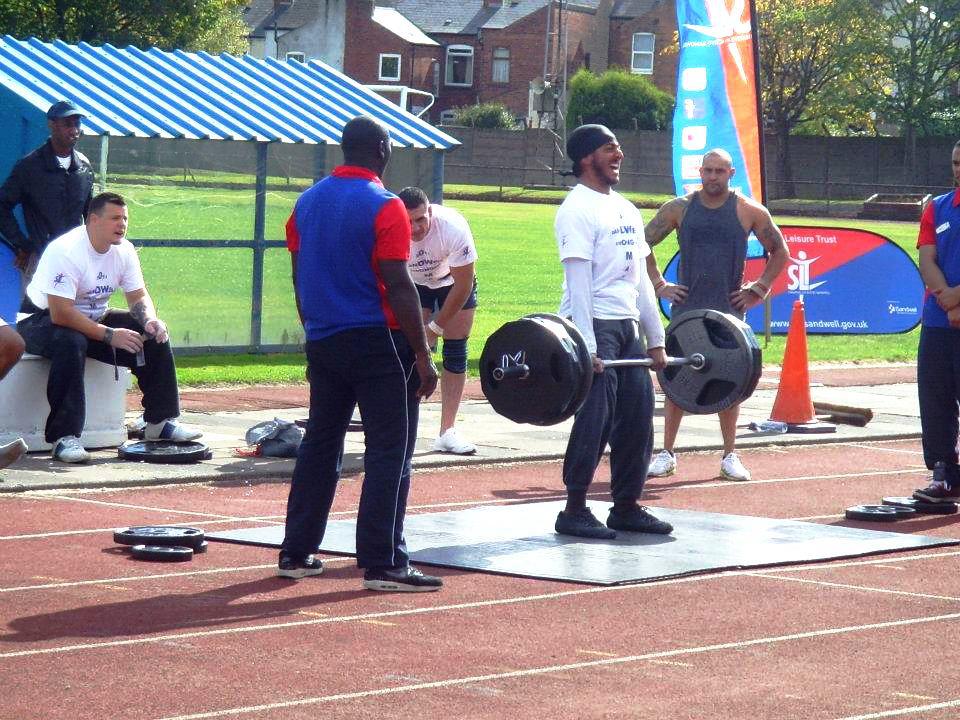 I know what you’re thinking. #BornToRoar

The following year, 2012, I was ill running up to the week of the strongman and unfortunately lost 3kg of bodyweight. Way off my normal self but decided to give it my all anyway. Refusal to give up is one of my punishing traits. Still to my surprise I came in at fourth. This is where I broke my all time personal best deadlift by doing 220kg @76kg body-weight.

The following year I had to skip the event due to further illness and not training for four months. Correct to say I was a wreck, final year of University and stress had beaten me.

This year, I decided to make a swift comeback, despite being largely sedentary working on many projects and not doing any strongman event specific training (which would later bite me in the ass).

I had nothing more than an outdated leaflet containing the events timetable and some lifting equipment. It has always been on my mind to give it my all, I knew winning would be a tougher task now that the competition was split into under 90kg and over 90kg. Coming in at 74kg, all guys had a weight advantage over me. Still, that never shook me in the past.

I scored 16 repetitions and was more than happy with the result considering I was in shoulder rehab (rotator cuff). I came third to a guy with unbelievable muscular endurance and a guy who had immense power and was using a snatch technique!

This one was really a mental challenge more than anything. I had the hardest job as I was the lightest guy there. It stopped two or three times making it even harder to get it moving again. As relentlessly and consistent I am it finally crossed the finish line. 90 seconds of agony. The slowest time out of all competitors but a completed pull nonetheless.

This was a doddle for me. Grip has never been an issue due to years on construction sites and heavy deadlifts. The down side was there were an odd number of competitors meaning I completed this event on my own. It goes without saying having someone two meters away from you makes it interesting and a race but I can’t complain. I finished in under 25 seconds giving me a top 3 finish.

This was an event I thought I would have done better on; I had been working on Olympic lifts quite a bit and was up to new personal bests of 95kg. The log however, mixed with terrible tactics coming in on weights gave me a tough time. I completed the empty log which was 70kg easily and felt strong. Decided to opt out until 80kg was on the bar and thought I’d easily press that too. The size of the log gave me problems and I ended up with a failed lift after failing to clean that treacherous piece of iron! More log practice needed.

This was my strong event and I ended up beating most guys there, even in the heavyweight category (we all pulled the same vehicle). My time was 32 seconds. If I had removed the slack from the rope better and not ripped my calluses open on my hands I would have been closer to that 1 meter per second mark.

This was the end of Day 1. A frustrating day with three events totally not going my way, but that is a part of competing.

I managed to complete this in a decent time. The tire flip is easy enough, just hard to keep under control. The hay bale was nothing short of awkward, getting it moving was tough, rolling it required just consistency.

This one was the worst, a real test of mental capacity, your body is shouting no more and you have hundreds of people shouting you on to carry on. Average time posted with lactic acid beating me in the sled pull.

Despite a few balance issues and stopping once or twice this event went well. First time with a frame on my back, wearing a full sleeve compression top didn’t help with the grip but still a good effort and time.

Usually my strong area but like most competitors at this point, soreness and pain was flowing through each muscle in the body. Nothing apart from crowd cheer was left in the way of giving us energy. I came in at 200kg, an easy opening lift expecting to get a new personal best of 220+. 210 came up the same way but 220kg didn’t move. I had nothing left to give.

Overall a great competition, I finished in fourth position out of 7 guys under 90kg. But competing is about more than positions. I was able to judge current fitness levels, strengths as well as weaknesses (which were most of the events).

I wanted to share this because I do want to get more involved in competitive lifting. Strongman is great because it’s variety and isn’t so static, but I’m sure I’ll be doing some powerlifting soon.